John Brook was born in Woonsocket, Rhode Island, in 1924. His interest in photography manifested early. Encouraged by his father but otherwise self-taught, Brook began taking photographs as a young boy of five. By the time he was twelve, he was developing film and printing his pictures — and “taking available light candid photos of my school teachers and classmates. The teachers didn't like the pictures (although one of them was ultimately published in the magazine Mademoiselle).”

After graduating from Harvard, Brook officially started his photographic career, opening a portrait studio on Newbury Street in 1946.

This was a significant step for photography in Boston, a medium that was steadily increasing its presence in museum and gallery exhibitions and collections. Brook began showing his work in Boston’s Sidney Kanegis Gallery in 1955, and exhibited in galleries and museums across the United States and Europe in the first decades of his career.

In 1966 Brook was one of several photographers, including Jules Aarons, Harry Callahan, Paul Caponigro, and Minor White, who exhibited work in a group show at the reopening of the Carl Siembab Gallery on Newbury Street, where Brook showed frequently. In 1961 Brook's photography was the subject of the inaugural exhibition in a newly designed gallery at the George Eastman House. He was one of twenty photographers shown at the Kodak Pavilion of the 1970 World’s Fair in Osaka, Japan.

Brook was an active member of the Boston art world in the decades when the school of Boston Figurative Expressionism was thriving. While the focus of the movement, which emerged from the School of the Museum of Fine Arts in the late 1940s, has historically been painting-centric, other media, including photography, had a significant presence. Brook captured the era in photographs of friends and their families in a style that was distinctively his — soft-focused, enhanced attention to light and shadow, an emotional connection to the subject, overt symbolism, a profound consideration of human relationships — and how all visually translated to a work of art.

His attentiveness to the technical innovations of the photographic process is apparent across multiple series and subjects, in both personal works and commissions. A chance optical aberration in a portrait of a father and child led to his experimentation with lenses, which he would often build himself. Commissioned portraits have a distinctive soft-focused flare to them, with settings reminiscent of an earlier time.

Brook seemed to relish the idea of being of another time. In an anecdote regarding an exhibition at the Carl Siembab Gallery in 1970, Brook recalled that Siembab described him as a photographer who took “100 year-old pictures every day.” He often described his work in otherworldly terms, as illustrations of thoughts and fantasies, and not necessarily grounded in reality. He wrote of seeking beauty in his works in a way that placed his philosophy in the realm of the social and cultural mores of the late-nineteenth-century Aesthetic Movement, whose artists asserted the authority of beauty as the force behind all aspects of daily life.

Brook’s works, in both subject matter and style, are also closely aligned with the Pictorialist movement of the turn of the twentieth century. Pictorialists sought to establish photography as a fine art through carefully chosen and idealized subject matter, soft focus, and low tonal gradation. A pictorial landscape was a romantic pastoral escape, and figures symbolized ideals of beauty. Brook’s veneration of the human form closely aligns him with pictorial photography, and he is perhaps most known for his soft-focused representations of the nude.

Works appearing in A Long the Riverrun and Hold Me included male and female figures, both alone and together, posed in sun-dappled natural settings. Brook unabashedly sought the beautiful in his work, describing a process where he “found beautiful people, places, and moments in a world that was getting uglier every day.” 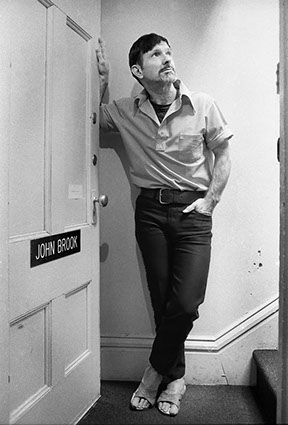 In interviews, Brook stated that his work did not have any photographic influences, but it is difficult not to read some photographic history into his subjects, settings, and aesthetics. Besides the formal elements of Pictorialism, there is edginess in his subject matter, particularly in his treatment of the nude, which is immediately reminiscent of F. Holland Day.

Brook’s work can be challenging, and he asks us to look beyond the subject that he often provocatively captured with the camera. His use of the symbolic and allegorical tenets of Pictorialism speak to his philosophy that subjects appear as they are found, and represent more than can be seen with the naked eye. He confirmed this for the Boston Review of Photography, “I use whatever optical technique seems best suited to what I happen to be doing, but the character of the image is determined at the moment of exposure and not altered later in the darkroom.”

Brook’s work was both historical and very much of its time, with contemporary subjects remarking upon long standing visual traditions. He worked in both color and black and white, with striking similarities, although his remarkable color work has been seen by a more limited audience. Brook described the color work as “color transparencies of visual events found in nature,” as if he was trying to make an ephemeral experience visible.

His interest in capturing the unseen puts him among the science and mysticism that drove a number of artists working mid-century in Boston, as well as connects him to a long photographic tradition espousing a desire to visualize the unseen.

Brook’s later years were spent in relative obscurity. By all accounts, he lost touch with friends and artists who had known him during his early years in Boston. He moved into the Presentation Rehabilitation House in Brighton, Massachusetts after an accident in the 1990s, and died there on July 29, 2016, at the age of 92.

—Adapted from Jessica Roscio's essays for Return to Riverrun, a portfolio of six reproductions of John Brook photographs.