ABOUT JOHN BROOK:
A Circle of Friends

I do have one viewer that I … well, I’d say he even exceeds the ideal that any artist could hope for. Bob Rogers not merely buys a great many of my photographs, he commissions a great many photographs. And this can be said of other people, of course; other people do commission me to take photographs. But Bob consistently commissions me to take photographs that it would be otherwise impossible for me to take, and the commission is more in nature of collaboration than a simple commission. He sees people that he … sometimes just people on the street he sees in some way as beautiful or memorable and he wants me to photograph them, and in so many ways — and so he pays me to photograph these people, and they are people that I would never encounter myself, and they are people that I would never have the opportunity to photograph unless Bob commissioned the photograph — in the sense of providing the financial means to take the photograph — but he also provides the subject matter. And this enables me to do the things that I have in many cases wanted to do, but have not found any opportunity to do, and that is about as ideal a situation as one could ask for.   … Bob certainly deserves to be classified as the ideal … the ideal audience for a photographer’s work.

I met Bob Rogers when he was doing the census and came to my house where I lived with my 3 children. That was the beginning, and from then on we were friends — sharing an interest in photography as well as enjoying a personal friendship. I was also a photographer, and he bought my photographs and gave me crazy things from Goodwill. He was the best friend one could ask for!

When Robert Doty, former curator at the Currier Museum, asked me to show my work there, Bob found a wacky green satin dress at Goodwill for me to wear. (No way was I going to do that!) If I called Bob to see if he would go swimming — or to Canada — he was always right there. He gave me numerous photographs, mostly from John Brook, and occasionally, I bought one.

When Bob’s health began to decline, he asked to be buried in my field, which is under conservation easement with the Five Rivers Conservation Trust. I agreed and Five Rivers agreed, and on September 23, 2018, the master photographer, John Brook, and his best patron were laid to rest, side by side, for eternity. 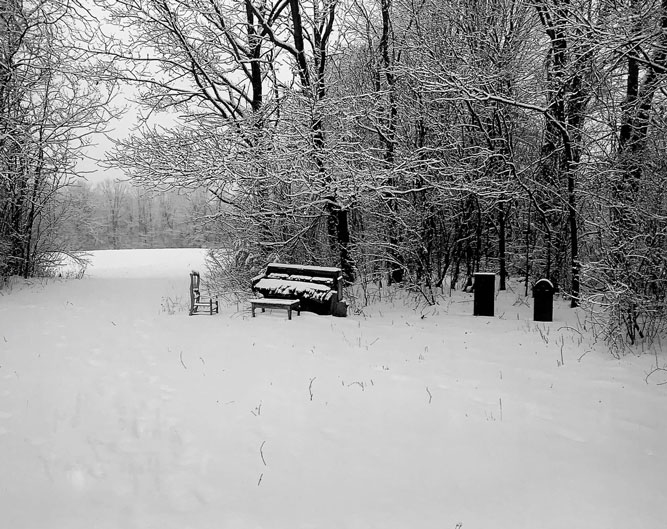 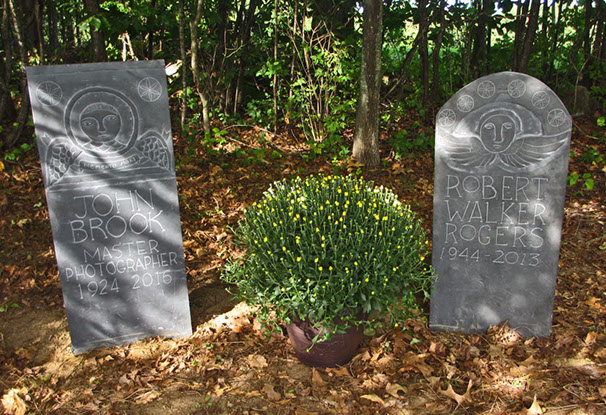 The gravestones were carved by Donald Saaf, Hope Zanes Butterworth's son-in-law. He describes his work as an "[exploration of] the place where fine art and folk art intersect." His work can be seen at donaldsaaf.com