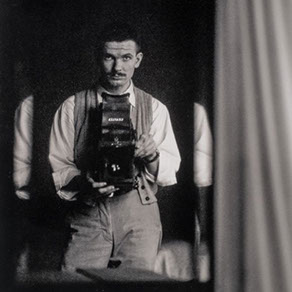 Born in 1924 in Woonsocket, Rhode Island, John Brook began photographing when he was just twelve years old. Ten years later, following his graduation from Harvard, he opened a studio on Boston's Newbury Street. His work quickly attracted a lot of attention, and his photographs were widely exhibited and published, including in his now highly-collectible book, A Long the Riverrun (1970). Unfortunately, his later years were spent in obscurity, and his work disappeared from view. He never finished or published his book of color abstractions to be titled Sun in the First House.

The John Brook Archive was established to bring Brook's wonderfully idiosyncratic work back into view with this website, a portfolio of six giclée reproductions of his pictures, and two exhibitions — Return to Riverrun at the Griffin Museum of Photography (January 9 – February 14, 2021), John Brook's Newbury Street at the the Danforth Art Museum at Framingham State University (date to be determined).

Brook's ambition to find “beautiful people, places, and moments in a world that is getting uglier every day” may be even more salient now than it was when Carl Siembab, his Newbury Street gallerist, described him as making “100-year-old pictures every day.”

Brook’s people are suffused with radiances of light (sometimes they seem to generate it as aura), they dance with joy, or lie tenderly pensive — warm, lyrical, emotional images, and interweaving through all of them the cycles of life.

John Brook employs soft focus techniques — anathema to the so-called purist — yet his photographs have persuasive power and great aesthetic quality.  If this is what he visualizes and expresses with the full power of conviction and realization, he stands the equal of all the glossy 8 x 10 practitioners. Unfortunately, the glossy print can often reveal a dull mind and spirit.

The photographs are “about” people:  love, union, and gentle feelings. Also about dreamy country places … [Brook's] scenes are physically and emotionally intimate, and a lady in the [Carl Siembab] gallery was overhead to say, “They just make me feel good all over.”